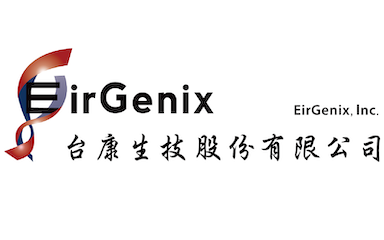 EirGenix, Inc. (6589) was founded on December 21st, 2012. In mid-March, 2013, EirGenix, Inc., Formosa Laboratories, Inc., and Development Center for Biotechnology (DCB) signed a joint venture agreement. EirGenix Inc. obtained the rights to operate the cGMP biopharmaceutical pilot plant facility and completed the transfer of all technologies, R&D, and production personnel in April, 2013, while taking over the original pilot plant team’s core capabilities, including cell line establishment, large-scale production process development, analytical method development, GMP quality system operations, and two cGMP facilities—one for mammalian cells and one for microbial— that are certified by the Taiwan FDA.
The DCB-cGMP Biopharmaceutical Pilot Plant Facility (DCB-BPPF) was established in 2001 as a consequence of the government wanting to create a cGMP facility, in line with international standards. The plant was to assist domestic biopharmaceutical development companies in R&D by manufacturing drugs, used for animal and human subject clinical trials, which meet quality standards and batch-to-batch consistency. The risk involved in drug development is substantial, and is the main reason that the government sought to build this cGMP facility. Without this government backed facility, a biopharmaceutical development company has to first, invest a considerable amount of money on production plant construction for the drugs without knowing whether or not the drug would be granted safe passage through the clinical trials stage. Then, if the drug falls short of expectations and is denied of entry into the market, the factory will become idle, resulting in inefficient use of funds and wasted resources. With this cGMP plant, the government hopes to reduce the barriers to entry for drug development companies.
In view of this, the government commissioned the DCB in 2001 to construct a cGMP biopharmaceutical facility and establish the basic biopharmaceutical technologies. In December 2005, the DCB obtained cGMP production certification for its mammalian cell plant and began providing related services to domestic and foreign clients. In addition to the mammalian cell expression system, the government re-commissioned the DCB in 2011 to construct a microbial expression system cGMP plant due growing demands from biopharmaceutical new drug development companies. The microbial facility obtained cGMP production certification in January 2013. These two cGMP plants, with differing expression systems, provided clients with biological production services in line with international standards.
Since beginning its industrial services in 2005, the cGMP biopharmaceutical plant team has continually assisted domestic clients in accelerating biopharmaceutical drug development progress and in acquiring the IND approval from regulatory authorities (such as Taiwan FDA, US FDA, EMA, and Health Canada) to enter clinical trials. In 2010, as the cGMP biopharmaceutical plant operations matured, the government started thinking to make it an independently operating company that will no longer rely on government subsidies. After a series of biddings, assessments, and reviews, the team formed by EirGenix, Inc. and Formosa Laboratories, Inc. finally obtained the priority agreement rights. They signed the joint venture agreement with the DCB in March. EirGenix, Inc. obtained the rights to operate the cGMP Biopharmaceutical plant.

Please move your mouse cursor over abbreviations with periods to see their full names.